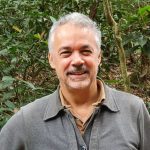 Ricardo Parrini is a Brazilian biologist graduated from the Universidade Gama Filho, Rio de Janeiro. Since 1984, he has made many expeditions all over Brazil to study the birds and their habits.

The knowleged and expertise he had built up, specially in the fields of Biogeography, Taxonomy and Bird Vocalizations, led Parrini to start a career as birding guide in 1998. Since then he has organized trips for private customers and has also worked for companies, such as Birding Brazil Tour, Boute Expeditions (Brazil) and Bird Holidays (UK). Along with other Brazilian ornithologists, Parrini published several articles in Brazilian and international journals and magazines.

One of the highlights of his ornithological career was a fantastic rediscovery of the Kinglet Calyptura, in October 1996, on the slopes of the Serra dos Órgãos National Park.

Parrini is a picturesque guide that can take you not only get to know the birds, but also their natural history and the diverse relantionships that these animals establish with fruits, flowers and other resources.